A Cleveland Roofer You Can Trust

The Cleveland Roofer Doug Coyne, founder and president of Price Rite Roofing & Siding would like to welcome you to our website! We are a local family owned roofing company and would like the opportunity to treat you as a member of our family! After completing a tour of duty with the United States Navy in 1986 I took a position with a Cleveland area roofing and siding company as a general laborer and within six years became an experienced installer.

For nearly 30 years I have continued in these trades working as an installer, an outside sales representative with a large Cleveland area building materials distributor, an estimator for several of Cleveland’s top roofing and siding contractors, branch manager of a national siding materials distributor, and operations manager for a Medina county based roofing and siding company.

Over the last 28 years I have either heard from customers or witnessed firsthand, most every failure of remodeling contractors to follow through with the superior quality of workmanship and customer service they promised to provide for their customers.

One day while working for a Cleveland roofing contractor, Doug Coyne was dispatched to write an estimate for an elderly couple in Brunswick. 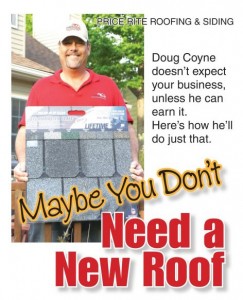 “The first thing that caught my attention as soon as I pulled into the driveway was that the roof looked to be in pretty good shape,” Doug recalls. “I walked around the house and found that one shingle had blown off.”

The customers noticed the same thing and concluded that it was the start of a bigger problem. They played right into the hands of two companies that preceded Doug’s visit to the home.

“They both wrote estimates for a whole new roof,” Doug says. “Unfortunately, I can’t say I was surprised. The couple confirmed that the roof was only about six years old. I didn’t see any other problems with it, so I took five minutes to replace the shingle and didn’t charge them for it.” The visit paid off in terms of personal satisfaction—and in new business. The appreciative couple eventually referred three new customers to Doug. “What goes around comes around,” says Doug, a 30-year veteran of the roofing and siding business who recently established Price Rite Roofing & Siding.

Doug, who also is a Navy veteran, isn’t just an estimator and salesman. He’s spent most of his career on top of roofs, installing shingles. “To really get to know a product, you have to work with it,” he reasons. He’s also gotten to know a lot of roofing contractors and how they operate.

“That’s why I want to be different,” he emphasizes. “I’m not looking to break the bank with one-time sales. I know customers, too, and if I do a quality job at a fair price, I know they’ll call me back next time they need something done.”

Price Rite focuses on roofing and vinyl siding installation, but also installs replacement windows, gutters and even does light construction, like decks. They also pressure wash roofs that have been invaded by black algae.

“A lot of people think they have to replace roofs when they’re covered with algae,” he says. “That’s usually not necessary. I’m not going to sell you something you don’t need. And once the job is completed, I will make a follow-up visit one year later, then again five years later, just to make sure that it’s holding up to my quality standards and the customer is still happy.”

In 2012 I made the decision to personally offer Northeast Ohio homeowners a fresh and new approach to the “contractor customer relationship” by founding Price Rite Roofing and Siding. Our goal is to treat each and every customer as though they were our neighbors, friends or family. Our long term goal is not to create One-time customers. We want to establish Life-time customer relationships! We want our customers to be so pleased with their experience with us that they call on us every time they’re considering a new home improvement project. We want our customers to call on us even if they are only seeking advice or have questions about a project they are taking on alone. Call us Today At: 440-238-ROOF

At Price Rite we depend on you, our loyal customers for our ongoing and continued success. Please leave your reviews of your experience with us on websites like Google, Yelp, B.B.B. and Angie’s List! We welcome and truly appreciate your feedback!

If you were 100% satisfied and pleased with our services we would like to ask you to tell others! Refer us to Neighbors, Family, Friends and Co-Workers for their next home improvement project and Receive a FREE $50.00 Gift certificate!

For: Restaurant Dining, Gasoline or even Department stores!

NOTE: The Customer you refer must tell us when we give the estimate that you referred them. Once they have purchased and paid for their home improvement project you will be mailed your $50.00 REWARD!

Our Service Areas Include:

Or request your free estimate

What is a roofing system?

A roofing system is the assembled components of a roof of a structure. Core components include decking, underlayment, drip edges, shingles, vents, soffits and fascia. Roofing systems including parts that are compatible with one another and installed at the same time increase the durability and integrity of the roof system to withstand sun, water, rain and other weather conditions.